This is the second post in a series of posts whose goal is to explore ways of helping learners develop their listening skills autonomously. You can read the first post here.

This post is not going to focus on the use of dictations as a classroom activity (for some great ideas relating to classroom use of dictations, have a look at this great recent post of Marek’s) but at their use as a tool that students can use autonomously to work on receptive pronunciation/decoding processes, writing (in terms of spelling and punctuation, but potentially also grammar) and vocabulary.

Dictations may not immediately come to mind as an autonomous learning tool: you need someone to dictate something to you (be that the teacher or a classmate), to check what you write and to highlight mistakes, right? Well, not anymore. In the age of the internet, it is possible to take dictation away from the classroom and put learners in charge of using dictation as a learning tool. But for those who lack access to a decent internet connection, or whose students do, never fear: there are other ways and means too, so read on…

1. Websites with dictations on them

Essentially, all you need for a dictation is a recording which has a transcript. The internet has made a multitude of these freely available. “But they are too fast!” I hear you say. It’s true, most recordings don’t come at traditional dictation speed, complete with punctuation. That’s ok though. It’s all in how you use them…

Some sites have specially made dictations for language learners:

On this site, amongst all the other things they can do, learners can choose from a list of dictations. As you can see, the dictations are labelled according to difficulty.

Once the learner clicks on one of the listed dictations, they are taken to a special screen:

The learner listens to the text and writes what he or she hears, in the box that is next to where it says “Guess“. If the word is correct, it will appears in the correct part of the right-hand box. The asterisks in this box correspond to the letters in the words that the learners will hear, and the gaps between them indicate where each word ends and another begins.

I think this is a valuable starting point for learners: these clues will help them become better at chunking correctly and hearing words within a speech stream. Of course, the instant feedback is useful too.

The British Council have an ESOL website – esol.britishcouncil.org – which has a section with dictations that learners can do. You can access these by clicking on Listen and Watch and then selecting Dictations: 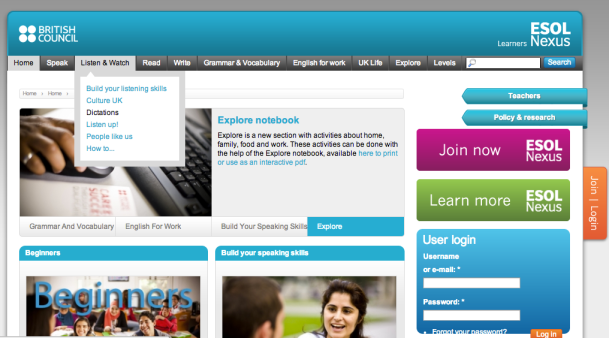 Selecting Dictations will take you to the following screen:

The approach taken to dictations on this site is very interesting. As well as the “Listen and Write” aspect of the dictation, learners who use these dictations can work through a series of tasks based on the speech features found in the dictation:

Here you can see tasks on word stress and identifying the verb. Other tasks I saw while playing with the site include counting the words, identifying the connecting sound (choosing between /r/, /w/ ), and distinguishing between sounds. If your learners are not interested in productive pronunciation, they can always ignore the “listen and repeat” parts!

So this website not only allows learners to use dictations autonomously, but also builds up an awareness of receptive pronunciation that will come in handy if they try to use other tools (e.g. recordings and transcripts) to do dictation-like activities. As a teacher, you could perhaps have a look at the tasks this website sets alongside the traditional dictations, and adapt them for use in class.

However, the reason I have become so interested in dictations as a learning tool is this Italian site:

Screenshot 1 from One World Italiano

The approach to dictation on this site is very basic: more basic, you might argue, than the other two afore-mentioned sites:

Screenshot 2 from One World Italiano

You listen at normal speed, listen and write at dictation speed (i.e. with pauses), listen and check at normal speed, then compare your product with the transcript. Obviously this is an approach that you could adopt with any recording and transcript, except that you wouldn’t get the dictation speed. It is also an approach that is flexible enough to be adapted in a number of ways, as we shall explore later in this post…

2. Websites with recordings and transcripts

Of course there are plenty of such sites these days… Here are a couple that I think are particularly good, as examples. (Feel free to comment on this post and suggest others if you feel strongly that they ought to be on this list!)

If you click on Search by Level-Topic-Country, then you should be taken to a list of interviews:

As you can see, in addition to the title, the nationality of the speakers and the level of the recording are also provided. This site is good because it is not “native speaker”-centric. So for learners who are interested in using English as a lingua franca, rather than speaking to native speakers, this might complement other sources very nicely. That there are different levels of recording is useful too, as it makes using the recording and transcripts more accessible to lower level learners.

The British Council Learn English site has a “Listen and Watch” section that makes a very valuable learning resource: 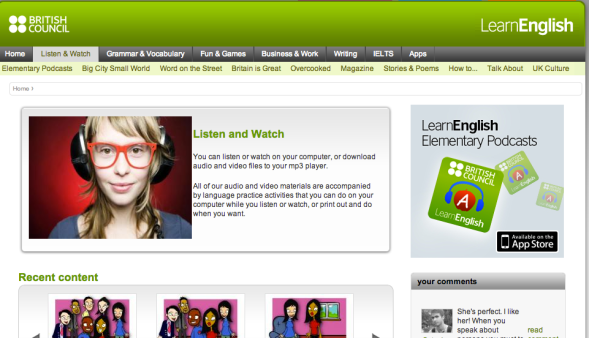 Here, you can find a variety of podcasts and series of podcasts, at a mixture of levels, which are accompanied by listening activities but also – all importantly for our dictation focus – a transcript!

Dictations are not limited to the internet. Other resources your learners could use include:

I have recently discovered graded readers as a language learner. (I knew about English graded readers as a teacher, but I think you can only fully appreciate them if you use one in a language that you are trying to learn!) What a revelation! I love them! (But that’s for another post…) Of course, as far as this post is concerned, we must limited “graded reader” to those that come with an accompanying audio recording.

Learners often get a cd with course book listening recordings or access to a cd rom containing either course book listening recordings or “extra practice” listening recordings/activities within similar topic areas. Transcripts are usually in the back of the student book or embedded somewhere in digital resources like cd-roms. (I know, for example, that this is the case with at least some levels of Speak Out; Headway digital has such materials that students may have access to etc.) As well as doing whatever language/skills practice activities come with these materials, learners could use the recordings and transcripts as another source of dictation practice.

Remember the book-and-tape sets you used to get when you were young? Then they became book-and-cd. These are generally aimed at younger native speakers, but can be equally useful for language learners, provided they don’t get hung up on the target age of the materials.

Ok, so we’ve established that there is no shortage of potential material for autonomous use of dictations as a learning tool, but what do we do with them?

Let’s go back to the basic approach that my Italian website offered:

A very good basic approach, which we could easily apply to the materials from both British Council resources and Elllo.org, but it can be extended and it is important to make full use of that “look at the transcript” phase.

But don’t stop there. Look at each mistake and the correct version, identify why you made that mistake, what/why you misheard:

My analysis of my errors (added to the second time round)

Then identify any patterns in your mistakes i.e. your general weaknesses: 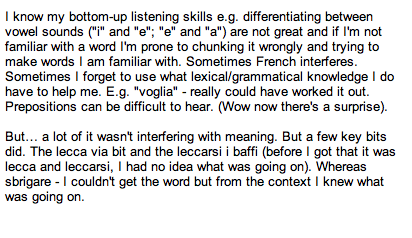 Note: I haven’t corrected the mistakes, only analysed them.

Thus, instead of transcript comparison being: “Oh, I made x number of mistakes, not too bad, will try again next time.” and that being the end of the dictation activity, it becomes an extended learning opportunity. The mistakes are where the learning is. Obviously I benefit from having a reasonable awareness of what contributes to receptive difficulties and therefore can analyse my mistakes reasonably easily. To help learners gain this awareness, why not do the activity with them in class and provide a handout to help scaffold their analysis? (Such as that found in Vandergrift and Goh, 2012 consisting of a list, written in the first person, of potential error causes, for learners to match to their errors) Of course, as mentioned earlier, the British Council ESOL Nexus site is a good way in to being able to analyse errors more effectively too.

What about when the recordings don’t come with the dictation pauses and are quite fast?

That’s ok. There are several ways to work with more challenging recordings in a similar way.

Here, I have highlighted my errors and put in underlining where I have omitted something. I will return to it in a few days and try to correct those mistakes by listening again.

(I will come back to this activity in more depth, including how to scaffold it in class and use it as a pronunciation tool, in a future post…)

I think the important thing when doing dictation activities with more challenging recordings i.e. recordings that are not geared towards it (and even when you are struggling with the gatto e topo recording, which is geared towards it 😉 ) is to not get stressed by it. Accept that it will be difficult, possibly frustrating too, and that you will make mistakes. The mistakes are the best part of it – they are a wonderful opportunity to learn. And there’s nothing like that moment of comparison, and the “ohhhhh” when you realise what you’ve done! So rather than it being traumatic and off-putting, it’s fun and focuses you very intently on what you are hearing. (For anybody interested in metacognition, this would be a mixture of person and task awareness! Being aware of how you might feel when doing a task and being ready to minimise negative feelings that may interfere with the task, and being aware of what the task will require [including where to find the resources and the effects of using different resources e.g. more challenging recordings vs. “easier” recordings] and its outcomes)

Using the resources and activities for autonomous learning

As with any activities that you want learners to do autonomously, it is important to:

I hope these ideas are useful and look forward to hearing how you/your learners got on with using them. 🙂 (As ever, related guest posts are always welcome!)