In his post for the British Council Teaching English website, David gives us a futuristic language teaching case from 2034, study drawing on currently existent technologies and their potential uses. His closing question is,

“Do you think there’s a role for the language school? I’m not so sure.”

But what about the social side of language learning?

In the private language school where I currently work, adult learners jump at the opportunity to do things in addition to their classes e.g. Reading Group, where they read and discuss a given graded reader periodically, and PSP speaking (an hour of mixed-level English conversation) or English-speaking Thursday nights at the pub. Who do they attend with? For the latter two, it is open to any level, and learners often sign up to join with, or in the case of the pub, just turn up with, other members of their class.

Their language classes are not only about language learning – though clearly this is key! – but also 2 hours and 40 mins to 4 hrs a week (depending on their course intensity) doing something with a group of friends, some of whom have been met in previous courses at the school, some of whom are classmates (for YL, teens, university students), with new friends made each course too, as new learners join, others leave and so the classes evolve. They enjoy being in each other’s company twice or three times a week, in the classroom, learning English together. Perhaps it should be no surprise: after all language evolved because humans are social creatures. The benefits of this in terms of language learning are, of course, the pair –  and group – work potential that is there to be mined, the collaboration, the opportunities to learn from one another, for a start.

Young learners, meanwhile, learn a lot more than language when in the classroom – they learn social skills, cognitive skills, motor skills and so on. And they have fun, too! Would they be there if their language learning at school were super effective? I’m not sure. But I do know that we don’t only have kids in need of remedial help in our YL classes. We have a mixture of brilliant kids/teens, average kids/teens and kids/teens who do need lots of extra help. To me this suggests that they don’t only attend because school language learning isn’t good enough. Some of them love English and learning, some of them doubtless are there because their parents think it is a Good Thing. The latter may start classes because of that and discover that they love learning too.

Perhaps for people who are learning English purely to get ahead in their job, David’s vision is a possible futuristic avenue. (Though I question if after working all day using a computer, as many might, they’d want their language learning to be purely computerised too?) Either way, for people who learn as a hobby, or as part of a holiday, or who combine it with socialising outside of work/school, for whom English is important but who want to use it to speak to people face to face (or on the phone!), technology is better off in a more ancillary role.

For me, the future of language learning still involves groups of people coming together to use and explore language. And the delicate in some ways, robust in others, ecosystem of the classroom, that “small culture” (Holliday, 1999), is part of this. The language school is another small culture, within which that classroom culture operates and by which it is influenced, as is the university language teaching centre, or the primary or secondary school and the languages department within it.

Does this make me a technophobe? Insecure about my future as a teacher? I hope not. I just think there is room for all. And perhaps technology, as used in David’s case study, will make language learning accessible to *additional* learners and become an additional option, rather than becoming a replacement. I think that as far as technology is concerned, as with language teaching and learning methodology, there’s no need to throw the baby out with the bathwater, as Michael Swan would say. I think we should build on what we have rather than lopping off entire aspects of it. 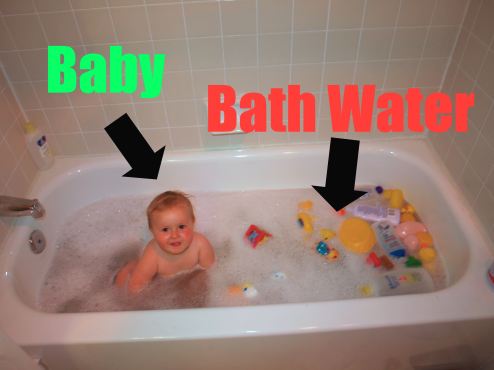 Don’t throw the baby out with the bathwater! Image taken from google advanced image search licensed for commercial reuse with modification (source: http://www.wikipedia.org)

What do you think?

12 thoughts on “What about the social side of language learning? (In response to David Petrie’s “The Future of Language Teaching”)”