Michelle Hunter’s talk is about demanding higher in ELT – silently! She asks us how we have been getting on so far with the conference. This is a talk, she feels like it is more a case of talking between us all rather than death by powerpoint. The belief system she is growing within herself is that we are all equals despite being diverse and so it’s let’s share ideas!

She is a firm believer in silence although she is not always very good at it. She has experienced the power of being silent in the classroom and hopes higher level thinking goes on in that quiet space. She will explain what she means by silence – does not mean The Silent Way, but a silence that is full of attention and generative listening. Silence with a purpose. She got her ideas from a person called Nancy Klein who demonstrates her belief system in the way she communicates. NK has been around for 25-30 years now.

She used silence to demand higher of her students, by not jumping in and offering an answer but giving students more time to think for themselves. She is going to tell us how she learnt to do that. She is also going to share some examples from her teaching context (in Germany at one of the universities).

This applies even more so to doing things in another language. Michelle noticed in the world of academic English that it is less about perfecting your English and more about learning how to think academically. (This was on a 6 week pre-sessional) Students need to be able to be critical, evaluate, think at the higher order levels of Bloom’s taxonomy, have rigorous and coherent arguments and come up with really good, strong ideas. How do you come up with an idea if you can’t sit and think about it quietly? Or with a teacher to sit and listen to those ideas and help you further them? So Michelle has a group of people who need to think rigorously in a second language and she wants them to do that by pushing them further.

Michelle discovered that lots of people have looked into giving people more time to think, it has been around for quite a while as a concept, and wondered why we don’t do it more often. In a lesson observation, Michelle held silence for 20 seconds possibly longer. She did some further research into the topic and discovered that Stahl changed the word from wait time to thinking time. Then in Scott Thornbury’s A-Z blog, there is a post on silence which deals with 7 different writers, one of whom looked at the pros and cons of silence. Silence can be activating is one that caught her eye.

Michelle shows us Nancy Kline and asks us to substitute ‘teaching’ for ‘coaching’. She says ‘Equate coaching (teaching) with generative attention not just input’. ‘For coaches (teachers) to create the conditions for independent thinking….they first of all have to be interested…in where the client will go next in their thinking.’ Michelle has shared her video on the website that we can access on http://www.demandhighsilently.com

The basis of Michelle’s silence in the EAP classroom, and her ability to do think time rather than jump in, breaks into ten components. 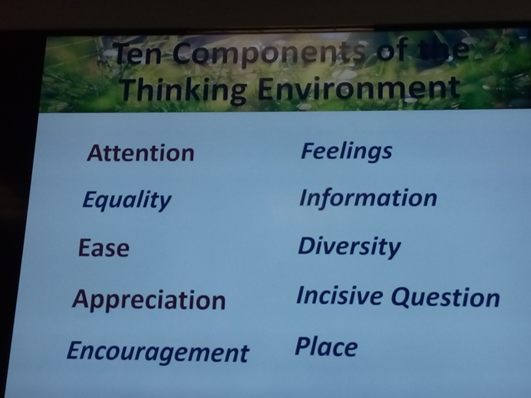 Attention is probably the most valuable thing we can give to another human being. Totally focused, uninterrupted, non-judgemental with generative listening. Through that attention, a brain can work and function, knowing it’s not going to be interrupted and come up with great ideas. Somehow your brain knows that I am curious, interested etc. If you wait, you can see the cogs turning and the thinking happening, so that someone can come up with their own answer to a question.

Ease is an important element in the classroom. If you create ease, then there is a safe place to work in and the brain doesn’t get frozen by emotion.

Appreciation (example of a teacher who was reported as spending ten minutes telling each child how special they are, in a special needs classroom). 3-1 is great. 5-1 is better. 13-1 is overkill. In terms of positive to negative feedback. So give positive feedback more often than negative feedback. Neuro pathways open up when you feel appreciated. So your brain works better. Not empty praise, but appreciation. E.g. thank you for coming.

Michelle wanted to test out something more concrete in her classroom. She tried out Thinking Rounds in Class. You use it in the opening and closing of a class. Sit in a circle and the stipulation is, everybody has a chance to speak, about a question asked at the beginning. E.g. Share something about something positive that  happened to you last week. This sets up an atmosphere of positivity in the room, which opens up the brain and that creates a more constructive working environment. The feedback from this process was very positive – that everyone got a chance to speak and knows they wouldn’t be interrupted and could finish their thought to the end. A form of equality. The closing round was one round to say what went well and then the appreciation round (Saying what you appreciate about the person next to them in the round). One group did it really well, one group was a bit giggly. To round off the whole process was a writing exercise – how you see a thinking environment and what do you think it could bring you. (The lesson on the thinking environment will be on the website)

Michelle was aiming to adapt what she learnt about coaching to use in her teaching. She hopes we can find something useful in what she has shared, some elements to take away. She finished by introducing herself!! She lives and works in Germany, has done some pre-sessionals at Bristol University.