Yesterday (7.2.16) I did my second session for the Leeds Beckett M.A. ELT’s Multimedia and Independent Learning. This time, it was an online session, conducted using Adobe Connect software, and its title was “The Learner Autonomy Maze”. It was the longest online session I’ve delivered to date, and the extra length was actually rather nice because it meant I could spend plenty of time on all the interactive elements and respond to what was coming up in the chat without feeling panicky about getting through all the content. (This probably means that when I plan my 1hr webinars, I really need to include less content so that I still have plenty of time for all the interaction!) Having met the students in the face to face session I did with them several weeks ago, I felt very relaxed right from the start, which was also nice. It gave me a taste of what online teaching might be like, which made me think back to the session about this that I attended at the ELTC recently and, I believe, still need to write up!

I started by outlining the session, which was to be a combination of theory and practical ideas, and then briefly elicited student definitions of learner autonomy. Before turning to definitions from the literature, I also asked them to think back to a drawing activity that they had done at the start of the module, in which they had to draw what learner autonomy looks like, and consider whether their perceptions had changed since then, courtesy of the lessons and/or their reading. The general feeling was that their perception of it had expanded beyond the image of a lone learner sitting in front of a computer, to include such things as other resources, other learners (collaboration), decision-making and knowing how to learn.

I then went on to highlight that definitions of learner autonomy tend to depend on the context, beliefs and past experiences of the person doing the defining. Indeed, we all talk about learner autonomy, which is somewhat of a “buzzword” in ELT, but often we are talking about different things. Sometimes defining exactly what you mean can be a useful starting point! Of course the literature can be helpful for this.

From there, we looked at some of the theory around learner autonomy in the literature, starting with Holec (of course!)’s (1981) both oft-quoted and less frequently referred to ideas: 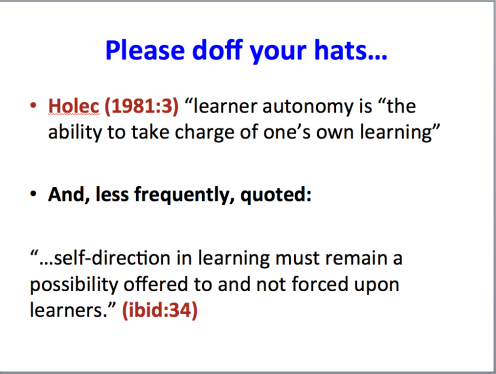 We also considered different perspectives of learner autonomy (as described in Oxford (2003): 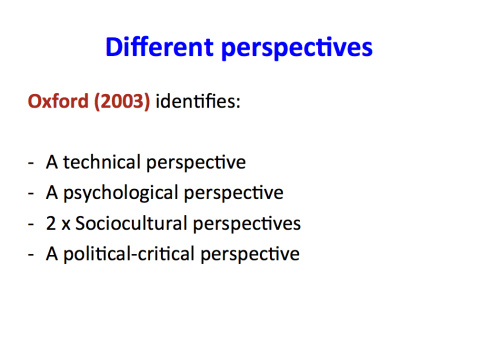 Firstly, there is the technical perspective, in which autonomy consists of the successful acquisition and implementation of a set of skills and techniques enabling learning outside of a classroom context. This is a deficit model, where the learner is a blank slate and the teacher’s role is to transfer a set of skills the possession of which, in the teacher’s view, makes an autonomous learner. Secondly, there is the psychological perspective, where the focus moves to what is going on inside the learner’s head, in which autonomy is defined as a capacity consisting of both attitudes and abilities. Then there are two socio-cultural perspectives, which emphasise social interaction and participation in a community of practice, with the belief that learning is mediated by a more experienced other. This can be the teacher but it can also be other learners, as all learners bring differing experiences and skills to the classroom. Finally, in the political version, the emphasis is on control over the learning process and content.

We looked at different approaches to learner autonomy (Benson, 2011): 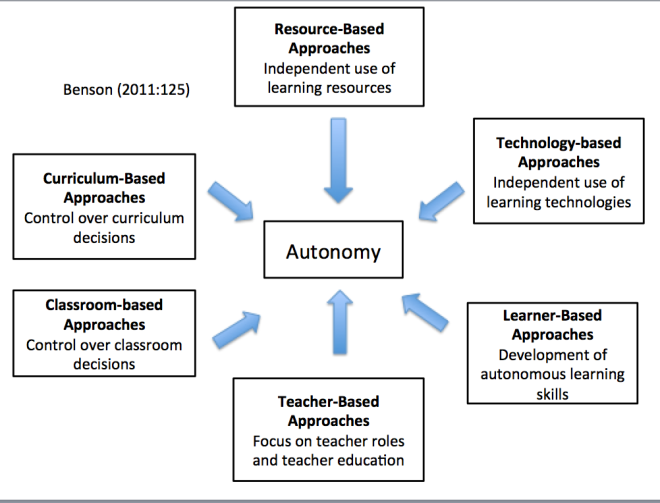 The role of motivation (see Dornyei and Ushioda, 2012) and metacognition (Vandergrift and Goh, 2012), and methodological possibilities (e.g. Smith 2003) were also considered. I believe that motivation and metacognition are both deeply entwined with learner autonomy and when we are thinking about how to foster autonomy, we need to consider these aspects too, in terms how to help learners develop the metacognitive thinking skills that will help them manage their learning better and how to help them stay motivated in the uphill struggle of learning a language and maintaining effort both in and outside the classroom.

I then shared a little bit about how I get students reading and using English outside the classroom, highlighting the importance of effective goal setting (see Dornyei and Ushioda, 2012 – 6 main principles of goal setting) and motivational flow (see Egbert 2003 in Dornyei and Ushioda, 2012). Next I moved on to talking about my EAP experience (yep, all two summers of it!) and some of the tools I used with my learners in the listening component of the summer programme, such as listening logs, strategy tables and metacognitive pedagogy (see Vandergrift and Goh 2012). In talking about these projects, I tried to demonstrate how, in each of them, I had used the learner autonomy/metacognition/motivation- related literature to inform my practice as best I could.

To round off with, I used a few sound bites from the literature and strongly recommended Morrison and Navarro (2014) and Vandergrift and Goh (2012) as go to books for ideas of how to systematically bring autonomy into the classroom. For more learner autonomy and metacognition-related resources, I also pointed the students at this post  on my blog.

Hopefully the session was useful for the students. (Thank you, students, for being so talkative/responsive throughout the session!) Finally thank you to Heather for giving me the opportunity to do this session. 🙂

Here are some of the resources I used:

Here is a list of the references I used:

Holliday, A. (2005) The struggle to teach English as an International Language (Kindle Edition)Oxford: Oxford University Press.

Morrison, B. and Navarro, D. (2014) The Autonomy Approach: Language learning in the classroom and beyond. Delta Publishing.