How can we create “a supportive and encouraging learning environment which can help to lower anxiety filters and challenge students to consider new or alternative methods of learning.” (McCarthy, 2013 kindle loc 4662)? That is the question that I consider in this post, a question that I have been exploring since doing a module on Multimedia and Independent learning, as well as one on Materials Development at Leeds Met as part of my M.A. in ELT. It is also one of the questions that formed the basis of the webinar on Learner Autonomy that I did in collaboration with the British Council Teaching English group.

Learner autonomy is complex and multi-faceted, as this diagram shows: 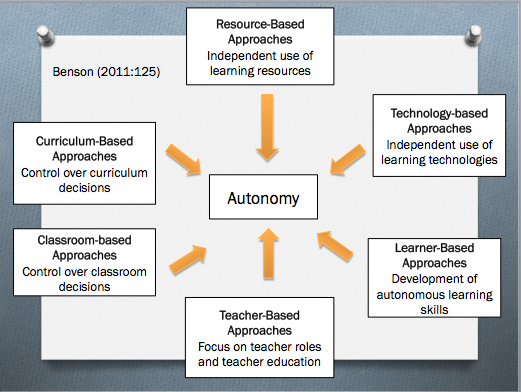 This diagram shows the range of levels on which learner autonomy can operate. My post will focus on “independent use of learning resources“, “independent use of learning technologies” and “development of autonomous learning skills” as well as “focus on teacher roles“, as the form of autonomy development that I discuss requires the teacher to play an active role in a non-traditional way.

The “Experimentation with English” project developed partly as a result of my keenness to investigate ways of helping my learners become more autonomous partly in response to an institutional requirement that learners do 10 hours of independent learning (homework excluded) in order to pass their courses. Benson (2011) draws attention to the difference between programmes that foster autonomy and those that require it. Without teacher  intervention, I felt that the afore-mentioned institutional requirement was part of the latter category. This was no criticism, but pushed me to consider ways of working with it so that I could use it as a means of actively fostering autonomy too.

Firstly, I considered potential reasons that learners might not be successful in their independent study. I came up with the following:

This is a very simple solution, drawing on a sociocultural perspective of learner autonomy. This version of autonomy places importance on the learner as a member of a social group, in which  learning, or in this case autonomous learning, is mediated by more experienced others. (Oxford, 2003).

Of course, the activity sheet/ideas will look different depending on your context and learners’ needs:

I feel it would be most useful to look at this in terms of the problems identified above.

In a feedback form that I gave to learners at the end of the course, I asked them if they had found the “extra” activities useful, using a Likert scale but also providing space for explanation of answers. In a separate question, I also asked them if they understood more about how to learn. Here are some of the comments:

“The discussion at the beginning of the lesson was stimulating to do more work at home.”
“They are very helpful to do something interesting with English”
“I think that the ‘extra’ activities are useful, because they are moments to improve our English and you can compare your extra homeworks to your extra homework of your classmates”
“It was very helpful because it helped us to improve our method how to learn English”
“Because they helped me to use English out of the class and to improve my speaking”
“The extras are useful. I can practice on the internet even not attending an English course.”
“Yes, because now I understood that I have to read or listen a lot in order to improve my English. Before this course I have only studied the grammar”

The comments show that the discussions had a dual value for learners: as well as the autonomy-related value, in terms of stimulation to learn outside the classroom, learners appreciate the opportunity to use language meaningfully, to discuss their experiences, and the effect this has on their speaking ability.

On the same form, giving them a choice of yes or no, and space for explanation, I also asked learners whether they had found setting goals useful. Here are some of the comments from learners who circled yes:

“otherwise it’s easy to waste time”
“setting goals and communicating them to others is an effective way to gain motivation”
“the goal compels you to accomplish a task in a shorter time”
“I’m glad when I reach my goals, even if they are a bit ambitious”
“They helped me to study more”
“You feel very satisfied when you reach your goals”
“With a goal, I was more motivated to continue the activities”
“Yes because I’m lazy so I need it”

Increased motivation was the most common theme with regards to the comments about goal-setting. While setting goals within this framework, where learners communicate their goals to others on a regular basis is not independent, I would argue that learners show autonomy in choosing goals for themselves and develop that autonomy in a supportive atmosphere, learning about different types of goals as well as how to set challenging yet achievable goals. It is clear that the learners cited above recognise the value of the goal-setting process, so hopefully this has become another tool for them to manage their learning – a tool that they will be able to use independently beyond the end of the course.

Learner autonomy can be scaffolded from within the classroom, in order to enable learners to benefit more fully from all the learning opportunities beyond it. Harnessing and managing motivation is as important as stimulating that motivation in the first place. However, in the classroom, teachers tend to focus on that initial stimulation, forgetting that any motivation that is stimulated also needs to be maintained (Dornyei and Ushioda, 2012). (To illustrate this, consider the difference between the project/framework described above and initiating the same project but then leaving it outside the classroom.)

By stepping into the role of enabler rather than transmitter, encouraging learners to try new activities outside the classroom and bringing that learning back into the classroom regularly (through reflective, collaborative guided discussion) as well as helping learners develop their ability to set effective goals, I believe that teachers can help learners to “systematise the capacities that they already possess” (Benson 2011:91), thus fostering autonomy rather than simply expecting it.