Giovanni is head of TT at IH Rome Manzoni.

Task 1: We had to a look at a picture of his hand and discuss what we could tell about him from the photo. (He plays a guitar, is left-handed, is married, likes rings… maybe… we will see…) Task 2: Complete the statement “I have nothing against LGBT people but..” The reason for this slide is that sometimes we talk about queering pedagogy but are teachers really ready for this? The question is “Can I come out?” The answer appears to be “You can! But don’t be ostentatious!” He had a conversation with someone who had nothing against… but doesn’t see why we always have to talk about our partner etc etc. Yet she was doing the same thing… Enter…

“Heteronormativity consists of those structures, institutions, relations and actions that promote heterosexuality as natural, self-evident, desirable, privileged and necessary” Cameron and Kulick, 2003. E.g. There are lots of interviews asking straight actors what it’s like to play gay characters but not vice versa i.e. gay actors playing straight roles.

1999 – Thornbury stated that LGBT people are still in the coursebook closet. In 2013 not much had changed. Ten famous coursebooks: no reference to any sexual orientation other than heterosexual. Some books use the problem approach – lists gay families under issues alongside gun control, prostitution, child abuse…can we see the issue with this? There is also the “mentioning approach” e.g. mentioning uses of the word ‘partner’ and the “Inquiry approach” – let’s adopt a multisexual approach and problematise ALL sexualities.

We looked at a coursebook spread about “Getting married” from Headway. Giovanni had to teach this lesson last minute a couple of years ago. He started with “What’s missing? Talk to your partner” – Older people, same sex people etc.

Giovanni isn’t suggesting we ignore the approaches discussed so far, but wants to add “The GPS Approach” – help teachers get started.

He did a study on teachers’ attitudes towards LGBTQ themes in their classes. The findings were as follows: 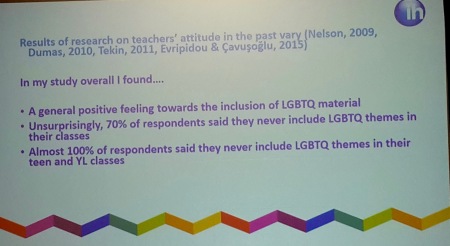 Respondents welcomed both an inclusion and inquiry approach as long as they receive training and operate in safe environments.

A teacher with a CPE certificate felt they didn’t have the words to talk to a gay flat mate about it in a respectful way.

The cons they came up with:

could be dealt with:

Here is a list of “the others” that a young class in Giovanni’s school came up with:

They made some excellent materials including people from their list of others. And no juniors or teens were harmed in the making of this lesson…even when queer themes came up. :-p

Why is all this important?

Morgan (2004) “there is no neutral space in schooling, no ways to insulate oneself from the social consequences of one’s activities” (p176)

One thought on “IATEFL 2018 Queering your pedagogy: teachers’ queries out of the closet – Giovanni Licata”