–  Yes, the fourth: the third was last week but I was buried under rather a large pile of essays so I didn’t have time to write it up. So this week is a double bill! Hurrah!

To quote from my write-up of the first session,

The idea behind this one is that EAP lessons can get a little dry – learning how to do things academically is not necessarily the most exciting thing in the world even if it is essential for would-be university students – and for the students’ sake (as well as our own!) it would be great to bring in more, let’s say ‘TEFL Tweaks’ – things that we used to do when we taught at language schools abroad (warmers, personalisation, fun activities etc!) and have got out of the habit of doing in the EAP context but that could actually be adapted for use here without losing the all-important lesson content. 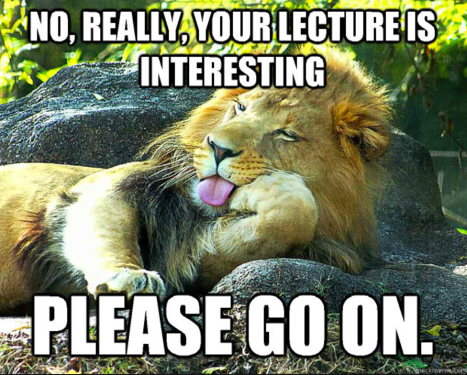 In session 3, last week, we shared the following ideas:

1. Catch-all nouns and cohesion in pairs

This is a useful review activity for students who don’t seem to be using catch-all nouns in their writing.

For those less familiar with EAP-dom, “catch-all nouns”, also sometimes called “general nouns”, are nouns that can be used to condense ideas already put forward, so that you can refer to them and give more information about them. They are general words that take on specificity through what comes before (or indeed after) them, for example problem, issue, process, approach, trend etc.

For this activity you:

E.g. First the cocoa beans are picked by hand and placed in the sun to dry. Then they are put in large sacks and loaded onto lorries (sounding familiar to anyone who teaches IELTS?!). ……………….. is repeated many times a day. Answer: This process.

Here is an example set of worksheets that my colleague whose idea it was gave to us: 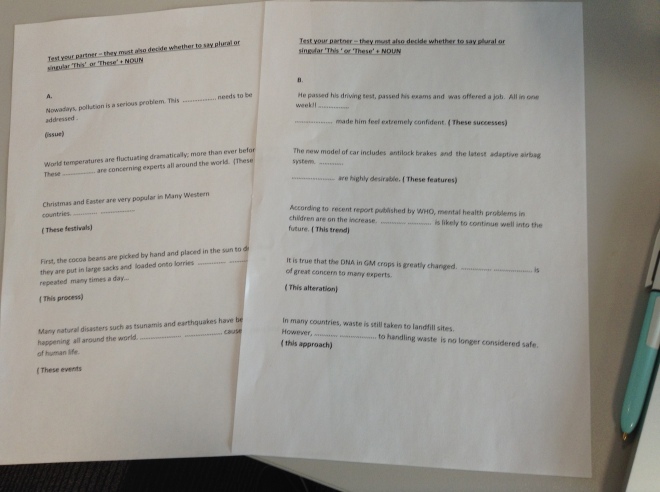 The benefits of this activity are:

Variation: Have students stand in a line; read out a gapped sentence; students step forward if they can think of a word + determiner that fit the gap. Actually I think it would work really nicely with mini-whiteboards too. Ahhh mini-whiteboards. Those were the days… 😉

This activity can be used with any listening extract where the speaker refers to data taken from a graph, where the graph has been provided in the materials for students to look at.

Instead of showing the graph to the students, get them to listen and make notes on it. Then put them in groups and get them to produce the graph based on what they have written down.

If any of you academic IELTS teachers out there are feeling keen, you could record yourselves talking about data from a graph (make it a funny graph so the activity is less dry!) and get the the students to produce the graph based on what you say. Then you could get the students to repeat the activity themselves – group them, get them, in their groups, to prepare a graph and discuss how they would present the information in it (using IELTS writing part 1 language) and then pair them up with someone from another group. Student A talks about their graph, student B listens and takes notes and then tries to draw the graph. (Or they could directly draw if you don’t want to bring note-taking skills into it!) They swap roles and repeat. Hopefully the language becomes more meaningful through being used communicatively.

The aim of this activity, as you would guess, is to work on students’ reading speed.

You could use this activity as a way of practising different speed reading techniques: teach students a handful of different techniques (find examples here) and then use this as a fun way to practice them.

4) Variation on a debate theme

This is less of an activity and more of a variation on an activity: when you are doing a class debate, instead of dividing the class into 2 groups, half for and half against the motion, divide them into three groups and give each group a role:

In session 4, today, we shared the following ideas:

My thinking behind this activity was that in day-to-day life we do evaluate, but when it comes to academic writing, students think that evaluation is this really difficult thing and it usually therefore gets omitted, so hopefully rooting it in the students’ own (meaningful) output, it will be more memorable and make more sense.

This activity is an extension of the fishbowl synthesis activity we talked about in session 2. Once students have fishbowled (yes it’s officially a verb now – at least in the USIC staffroom!) and written the summary paragraph, usually what you will find is that they have just about managed to synthesise stuff but there will be little if any evaluation. To get them to make that extra step which is needed in order for it to be a good paragraph rather than just a collection of information, elicit from them what’s missing from their paragraphs (which are now on a Google doc) – i.e. evaluation – and then brainstorm/board evaluative language that they could use. Then give them time to edit their paragraphs accordingly.

(This could be used in conjunction with my activity…gotta love the scholarship circle!) 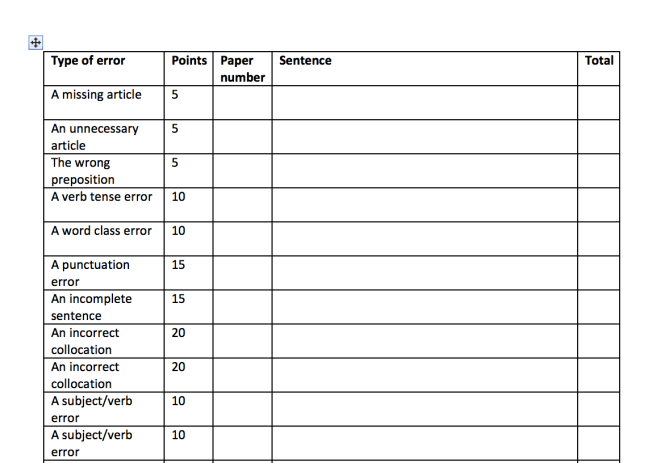 The idea of the lesson is to get students looking for typical error types. It also gets them up and moving, which is always a bonus in the EAP classroom! No reason why it couldn’t work with IELTS essays and the like as well! (This idea originally came from this pdf by Ken Lackman, about getting students involved in error correction, worth a look for more ideas.)

So, two great sessions, two motivation injections, and lots of ideas. 🙂 Let us know if you use any of them and how you got on!