Happy new year, everybody! The first 10 days of 2017 seem to have flown by. For my first post this year, I’m going to write about resolutions and effective goal-setting.

On Sunday I delivered a workshop as part of the Teaching Listening course that forms part of this year’s EVO.

(To quote EVO and explain what it is:  Every year in January and February, the Electronic Village Online (a project of TESOL’s Computer-Assisted Language Learning Interest Section) brings together English language educators from around the world to engage in free, collaborative, online professional development sessions. Last year, we had over 8,165 participants in 14 sessions.)

My session focused on helping learners become more autonomous listeners and the main task the participants will do this week is to set up an out-of-class listening scheme to use with their learners; considering, amongst other things, about what they want the learners to do, how they will introduce the different elements to the learners, how they will help learners to maintain their motivation. Of course, within my session, within the discussion on motivation, I talked about the importance of goal-setting and the features of an effective goal according to Dornyei and Ushioda (2012). Here is my slide which summarises these: 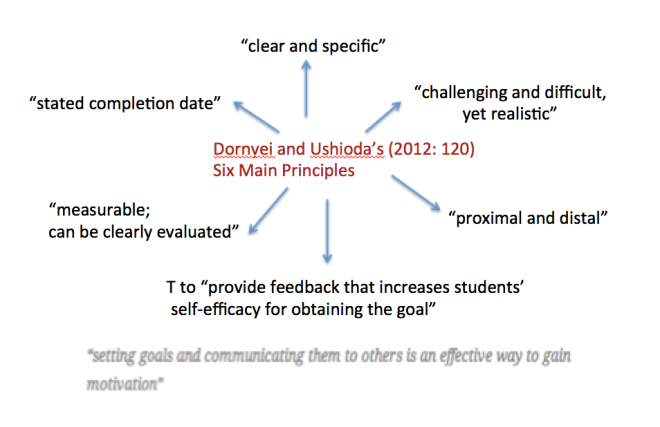 I always make New Year’s Resolutions. There is something magical about the beginning of a new year, and the potential it holds, that gets me really excited and I enjoy making my resolutions as a way of sizing up that potential and giving it some form. Usually, however, my resolutions are a bit fluffy and I forget about them fairly soon afterwards. This year, in order to help myself not to forget about them, I have copied them into a sticky note on my desktop so that I am reminded every day of the things that I set out to do. I also tried to make them more specific than usual, so that I can actually tell not only when I have achieved them but measure my progress along the way. It must have been preparing for the EVO workshop that subconsciously made me apply Dornyei and Ushioda’s (2012) principles for effective goals to my resolutions for 2017!

In the interests of gaining (extra) and maintaining motivation on the languages and ELT front, I’m going to communicate my resolutions relating to these areas here. Rather than just a list of goals, I am going walk you through the mental process I went through in making them, shaping them from a vague initial idea into something more specific, tangible and therefore achievable.

When I went through the mental thought processes described above, I wasn’t doing it with Dornyei and Ushioda’s (2012) principles in mind, but it’s clear that subconsciously they had an influence. And so I should think, the amount of time I’ve devoted to studying motivation, within learner autonomy, and trying to get students started on their autonomous learning pathways! I think as teachers, if we are able to apply what we want students to do to our own learning (of languages, of teaching) and have a clear idea of how to get ourselves from A to B (A being hazy ideas of goals, B being effective goals), we will be better able to help our learners go through that process themselves in the context of their language learning (if they want to then apply it to their New Year’s Resolutions and other aspects of their life, that is up to them!) with the idea that they leave our classroom better able to map and follow their learning goals. There is no one size fits all goal solution but we can help students become better able to set, and by extension meet, their own objectives more effectively.

What are your New Year’s Resolutions? Do share them in the comments – remember, communicating goals increases the motivation to achieve them! 😉

I hope 2017 is a fulfilling, successful and peaceful year for you all. 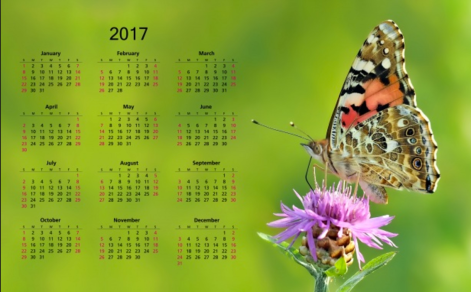