After this morning’s plenary, I couldn’t resist coming to this session to see the discussion continue. This time it’s a panel of speakers rather than Silvana holding the fort alone, and I have to say I am surprised that there aren’t more people here!

Marek introduced the session, telling us that there will be about half an hour the panel talking and then the discussion will open to the floor. He of course alluded to this morning’s plenary and what a difficult act it is to follow.

(Edit: It was tricky keeping up with everything, so please use the comments to let me know if you think I’ve made a mistake/missed something!) 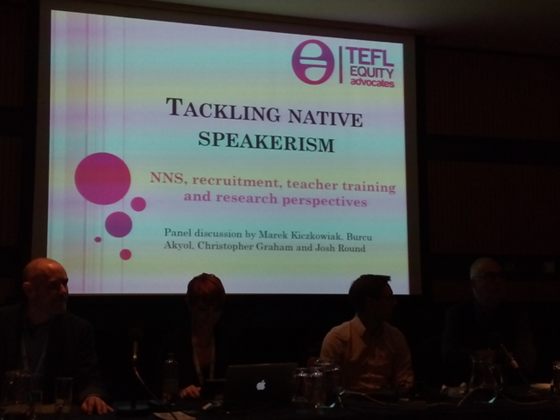 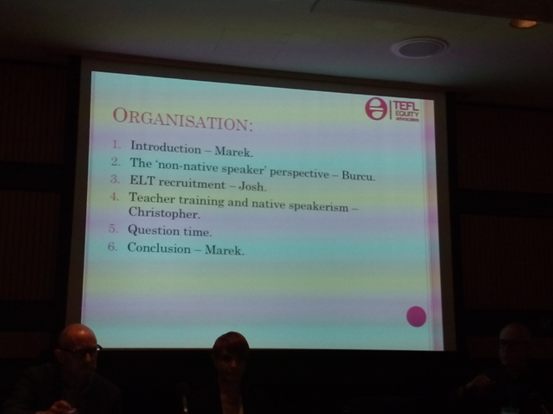 We start by looking at a job ad from TEFL.com. As Silvana mentioned, such ads are common. Depending on where you are in the world, between 72 and 88% of ads request native speakers.

What is Native Speakerism? It was coined Adrian Holliday in 2005. Like other isms, it’s a kind of discrimination/prejudice/bias. Teachers are classified on the basis of their mother tongue. Those who fit the native speaker description get a better deal, those who don’t will often struggle. In Japan, Houghton and Rivers pointed out that Holliday’s definition was limited as it also affects Native Speakers there, in that they can only lead conversation classes so development is limited.

It influences professional opportunities, recruitment policies, teacher training, SLA research with its monolingual bias where the native speaker is the ideal model. However, it can be tackled in various ways, which is what this session is going to look at. For example, proactive research that doesn’t separate NS and NNS into two different species and rather than identifying problems offers solution. There will also be reference to examples of bottom-up action, top-down action and how to be involved and committed to this.

She started learning English at Middle School. Her whole learning experience took place in Turkey. She wants to tell us about IATEFL 2009 in Cardiff, her first experience. Her presentation had been rejected by another organisation due to not being a native speaker. Teachers want to listen to native speakers, she was told. After that bitter experience, she expected few people in her session at IATEFL and was then shocked to have around 60 people in her room. This was a big turning point for her, in terms of of her perception of herself as a Turkish English teacher. Things are changing. Turkish presenters may not be turned down but they may have fewer audience members. As Silvana pointed out this morning, over 80% of English teachers are NNS. So we need to talk about this discrimination issue more openly.

In Turkey learning English is considered very important. Policy makers decided to employ a large number of NS teachers to teach alongside NNS teachers. There have been similar attempts in other countries: to import NS teachers to cure ‘the problem’. However, after 2011 there was no more said regarding that policy announcement. Fortunately. Policy makers need to support NNS language development and teaching skills. This will produce more permanent results than employing 40,000 NS.

It’s not about being NS or NNS, it’s about being qualified. Both have strengths and weaknesses, things found easier and more difficult. We need to free ourselves from our prejudices and stereotypes, leave aside prejudices to really talk about education.

He is lucky because when he qualified as a teacher, with a British passport as a NS there were lots of opportunities. It was great. Someone said to him, why has he got involved with this TEFL Advocacy movement because he thinks EVERYONE should have these opportunities. His interest comes from reflecting on his own personal luck. The plenary this morning was a significant moment. The issue has now gone mainstream. It has been around for a long time, some of the research is quite old, but now we are talking about it. Trouble is, talking doesn’t get things done, we need to start DOING something.

One thing that Christopher has done is write about it. He found a bunch of people like Marek, offered them some questions to answer and had some incredible viewing figures. He also had nasty hate mail such as “You are betraying your tribe”. (Wow…) However, the point is, we can all write, blog, Facebook, to get the message out there. 96% of the teachers Christopher works with are NNS teachers teaching in their own countries. He asked for a university posters to be taken down, with “Native Speaker” above his picture. Amongst certain communities there is a perception that “Native Speaker” is something special. A lot of bilingual and NNSTs can be their own worst enemies. So Christopher has started bringing this up as a topic. Some people think he is just trying to flatter/win brownie points. But then they also see the possibility of being valued. So he spends time talking about what NNS bring to the party. It is tremendously important to do this. To sow seeds.

He also thinks its important to say he does have sympathy with the small private school owner working somewhere with the 20 year long USP of the Native Speaker. It’s like telling McDonalds to go vegan. Change will be a slow process to go through… He is not pretending that bilingual speakers (and monolingual!) need language support has part of professional development. It is a question of going out there and doing something. If it makes one teacher feel more positive about looking for employment, then that’s already something!

Josh has been a DoS for 10 years, in London. UK-centric context. As a DoS of course he is a recruiter. It’s about having a fair and equal process. The starting point is having an Equals Ops policy and a mission statement. Inclusiveness would be a good word to have in a mission statement – applies to staffing as well as students. If there is an HR department (unusual), they can help, otherwise it comes down to the DoS. Instead of having shortlisting filters that look at L1 and country of origin, look at the competencies needed for your teaching team. Pedagogical skills, language proficiency, behaviours. These become your recruitment criteria. The process has to be quite systematic. Needs a system that minimises bias and has a balance of perspectives.

The next thing is this idea that students only want native speakers. In Josh’s experience that’s not true, as Silvana’s myth-debunking research showed. Students want and value other things i.e. having a great teacher (who could be native or non-native  – and bad and good are present in both categories!). It is important to say that English proficiency has to be talked about. This is the difficult decision area. If you are open about your approach, at some point you need to make a judgement call on level of proficiency. “Native speaker competence required” should be moved away from, instead “competent user of English” – but what does it mean? This can be a difficult area for recruiters. Managers who do recruit NNS say that students will sometimes complain and that the most common complaint is accent and pronunciation. Of course NS teachers have some special accents too.. So what do we mean? And of course English is a world language which students will need to deal with in the real world. So let’s have different varieties on the team to expose students to.

Be ready to deal with complaints. They’ll come along. Have your strategies and deal with them in the same as any other. What do they want? What do they think they need to learn the language effectively? Then educate them. Also important to be transparent, celebrate the strengths of your team and that becomes your selling point. NNEST CAN be best. Be open in your process and if the best candidate is NNEST, then go for it. They can offer a lot, as has been discussed. On a team of teachers, you need diversity to offer different, complementary skill-sets. Recruiters who have positive experiences of this kind of recruitment should share it, get it out there.  It’s about raising awareness.

There are lots of positives. TESOL International, TESOL France with public statements. Lots of websites are changing the way they are hiring teachers. EU Legislation helps but there is still the issue of “Native level of fluency”. There are also different levels of qualification required depending on language background. (E.g. a native speaker only required to have a Batchelor degree while a non-native speaker is required to have a Masters or a PhD!)

Ours is a strange profession, which accepts discrimination. What makes or breaks a teacher is passport and mother tongue. It is time to change that.

Error: Twitter did not respond. Please wait a few minutes and refresh this page.