Today we started with a 20 minute meditation as the consensus was it was much-needed (we have a lot of marking going on at the moment so everyone is a bit frazzled). Again, everyone agreed that it felt shorter than 20 minutes but minds managed to fit a lot of wandering in (unsurprisingly!). My mind certainly did a lot of wandering and I did a lot of bringing it back to the breath/various body parts/sounds as the meditation specified, as well as acknowledging to myself that I *was* finding it difficult and that that’s ok. (As vs. getting cross/impatient/frustrated about it!)

We agreed we felt better afterwards but one of us also said she was starting to feel angry that modern life requires this kind of thing in order to feel better. Another said that rather than getting angry with modern life, better to flip it and focus on what there is to be grateful about – using the example of well actually modern life is better than life for Louis XIV, who had candlelight only, no showers, less choice in terms of food. And then we talked about gratitude in general, coming back to the concept behind No. 11 in 30 Ways to Mindfulness. There was talk of a longitudinal study that one of us had read, which showed that people who kept a gratitude journal were happier than the control group who hadn’t. However, we also agreed that even if you didn’t necessarily write it down all the time, training your brain to perceive in that way is helpful. I used my own second week as an example:

I forgot to record anything on Monday, did too many on Tuesday (much like Week 1, my recording is hit and miss!) etc.

We also discussed how using meditation with students was going. Largely good but as some groups have changed (got large numbers of different students) due to post-late-arrival setting, there have been some teething issues around that. The good news is, the teachers in question want to persevere! We then talked about to integrate Mindfulness into our teaching beyond just doing a meditation at the start of the lesson. I told them about what I had done in our first listening lesson this term, which was to draw attention to the fact that the mind DOES wander and it’s normal for it to do so – the key is to notice it and bring the attention back. Obviously very important when you have a long listening recording (lecture) to listen to and make notes on, especially when exam questions follow – which is what we are preparing them for, as well as for university study of course. I used this slide to illustrate it: 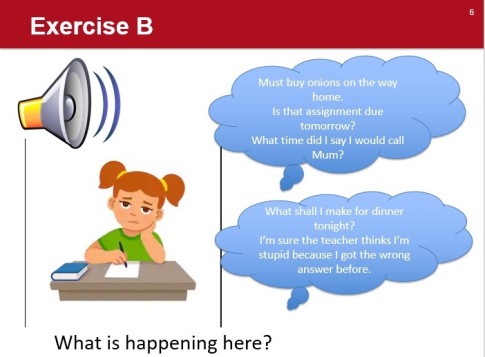 We then brainstormed other ways of integrating it. So, for example, after students have listened to a recording, getting them to reflect on how they listened – did their mind wander a lot? Were they were aware of it? Did they bring it back? Did they keep bringing it back each time it wandered or did they give up? That kind of thing. A similar reflection could be done after any given task, not only listening. (The mind will wander indiscriminately, not only during listening recordings :-p ) We acknowledged also that doing the meditation at the start of each lesson is also attentional training so it supports this kind of metacognitive approach, helps students to train their brains/get better at managing/directing attention.

We all came away feeling much better and happier at the end of the session – and it went really quickly! (Possibly because we spent the first 20 minutes meditating!) 🙂