Our final session for today (whew…! I am already exhausted!!) is presented by Kirsten Holt and Thom Kiddle, with the title Emerging new pedagogies: should we change the way we design classroom activities?

We started with a pictorial trip through classrooms of the ages and their evolution: 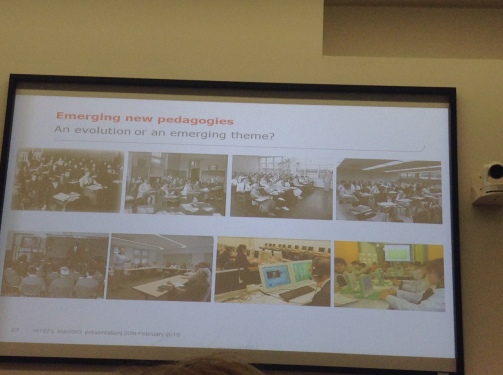 From rigid and inflexible, through a bit of paper appearing, a bit more paper and flip desks, breaking out of the set format, then in came computers, and tools, but it is all still very teacher led. How much evolution?

We continued with an evolution of tools: 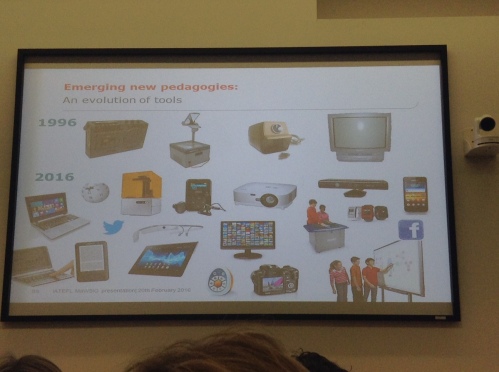 We have gone from projection on a screen by teacher, or all students sitting in a lab individually or on a computer at home. The boundaries are all now more blurred. Physical location is much more flexible. Students carry immensely powerful devices with them all the time.

In Japan, for example, you can hover your phone over a page and the characters start talking to you. Blur between print and technology. Augmented reality.

Tension between “no mobile phones in class” and what they could do. What is best practice? Do we know? Or are we swimming wildly in a plethora of potential without really knowing what best practice is nor how to implement it? What do we have to hold on to in terms of principles?

We have principles and pedagogy. John Drury in the early 20th century advocated that student centred learning should be the way forward. He encouraged students to become independent, critical thinkers.

Online offers potential interaction in a digital space outside the classroom either entirely or in a blend with classroom learning. Boundaries between physical and digital are being removed. There has also been the rise of the flipped classroom. The presentation phase is pushed outside the classroom space, accessed by learners in video or text form as preparation for the in-class follow up. SOLEs have emphasised that the teacher has to add value in the classroom, for it be worth the student coming into class! What does the teacher have to do to add that value to the space?

Thom told us about a project he worked on with teachers working alongside tech guys who said, tell us what you want to do and we will make it happen! It didn’t last. 4 out of 15 things were able to be done. He wanted the teacher trainers to think about what they wanted to do, how it would work in the classroom, and not worry about the tech but what ideally they would like to do, and a few things that came out:

It’s a tool not THE tool. Using technology to embrace learners’ output as input in the classroom.

Kirsten then talked about a model for pedagogy. She compared the usual balance in course books with the experiential model, and wondered if materials give enough opportunity for experimentation: 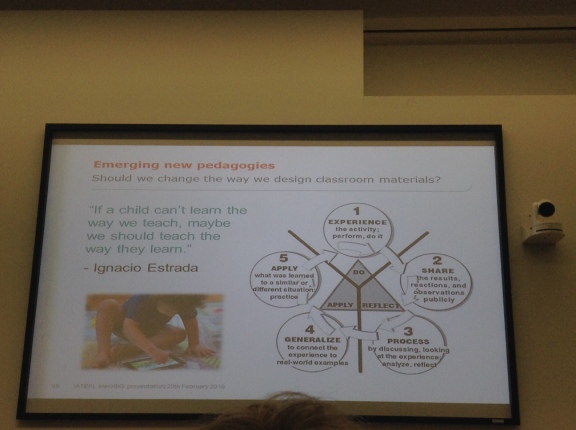 Kirsten also mentioned Flipped Classrooms and how out of class work isn’t homework but preparation for maximising learning time and extending what they have done in class:

She compared it with Task-Based Learning but more extended. And then went on to talk a little bit about how Macmillan English Campus could be used in this kind of Flipped Classroom way, giving as many choices as possible to the students – where students do preparatory activities and then in class the teacher builds on that by facilitating use of the language.

We finished by discussing questions: 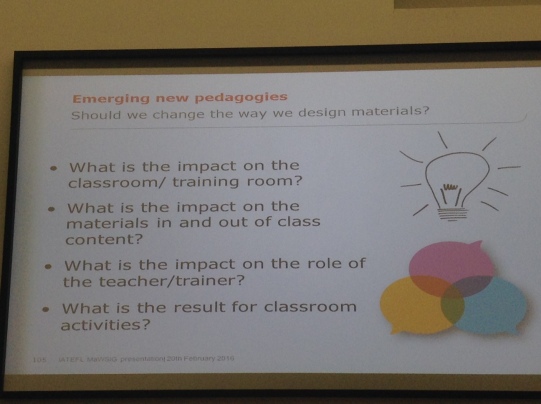 What do YOU think? 🙂

Kirsten also recommended that we have a look at “Tech tools for teachers” on Onestopenglish for tech tools that are not only for fabulous wifi connections!

It was a good session that managed what I thought was impossible: it engaged me enough to make me forget how tired me and my fingers were…

It also brought the MaW SIG conference day to a close. The wrapping up took the form of an open forum discussion, followed by a raffle (I won a book! Happy days!) and then drinks. I scooted off before the drinks because I had to trek back to Sheffield – just as well I did, as it was it was well after 9 by the time I got home!

Thank you to MaW SIG and sponsors Macmillan Education for a great day: am glad I bit the bullet and made the effort to get to London for it!