Time to attempt to reinvigorate my attitude towards IELTS! Hoping for some good ideas… 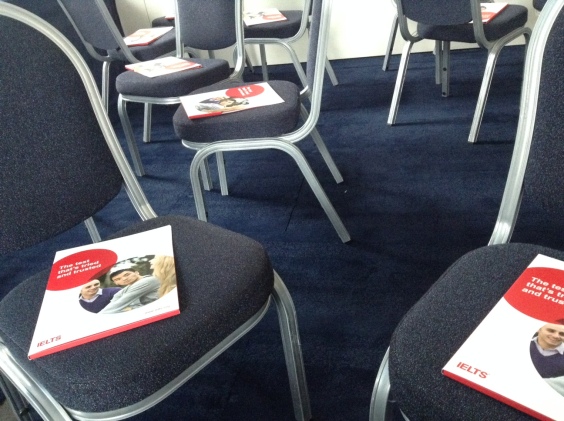 IELTS are trying to increase resources available. Not to be sold but to give them away and generate more ideas on the back of them. A process of this interaction, some editing, a webinar that we’ll be invited to, then (I missed the rest of the process but it all sounds positive!)

Well, it was an action-packed workshop, including group work and idea generation, as promised. No time for typing! Here are the pen notes I scribbled down:

They already make less sense than they did at the time…

Regards the top sheet, you can see we have to put our names on the papers, as we handed them all in at the end. The process of Mina liaising with us and editing a massive pile of papers into a coherent set ideas will take a while, but it should be good in the end. She reckoned September, which sadly doesn’t help me for the next 6 weeks, but hey! I have taken a few ideas away:

Suffice to say, time ran out really quickly! For more ideas, you’ll have to wait till Mina produces whatever it is that our ideas are all going to turn into. I suppose a digital resource of some sort! On the plus side, I have now got my teaching mojo back *even* where IELTS is concerned! Gotta love IATEFL!!