Time for another EAP-related talk…

This is something that heretofore has existed only on Tyson’s blog, but a book is coming out on the Round – watch this space… 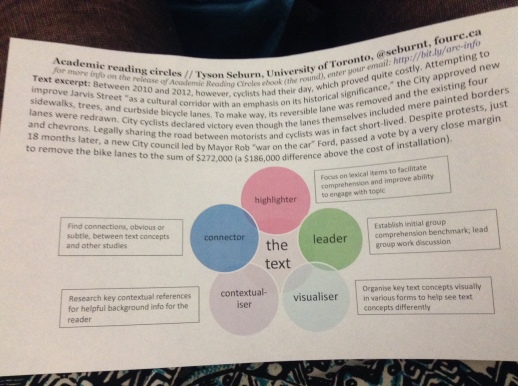 This project was developed and implemented at the University of Toronto by Tyson on a reading and writing course. The goal wasn’t to improve the reading speed but rather the deeper level comprehension, so that they are able to talk about it intellectually and use it in their writing. His students are undergraduates, and there are 16 per class, predominantly Chinese with a few Russian and Ecuadorians. Tyson has them for 24 weeks over the academic year.

Problems that Tyson noticed with his students:

They need to engage deeply with course texts in order to demonstrate understanding in their written work. The problem was, they were not. They were only doing superficial reading, which became evident when they were asked questions about the text or asked to discuss it, they stayed at a lexical level. Applied understanding was rare. They needed to synthesise content from a variety of texts, which requires deep understanding.

Tyson decided to try the idea of literature circles, which has been adapted to ELT. However, traditional style didn’t work. Literature circles are more about fun and don’t have a connection with writing, while academic context requires something more serious and robust. So not new, but adapted for a new context.

Start with a common text, usually teacher chosen, these materials are going to be used for writing. Students are given different roles (as pic above and detailed descriptions below) and work specifically within that role on the text outside of class. In class they work in a group and co-construct knowledge/understanding of the text.

situate text and gauge group. Finding out things like the purpose for reading (not the teacher said so!), the text source, the target audience, bibliographical information (also see the first couple of steps of the 12 steps approach discussed by Barbara yesterday). Create basic comprehension questions to use in their group to check their understanding. To do this, they need to identify the statements that represent key points. So, for our example:

Pick out the people, places, events, pieces of research in texts and identify them as research opportunities. They go to the internet and find out more about these contextual references. To be able to tell the group why the research may have referenced these. E.g. “as a cultural corridor with an emphasis on its historical significance” (useful)  or “city cyclists declared victory (not so useful). They could look up “the mayor” and “Ford”.

Find things in the text that could be graphically represented e.g. as videos, images, timelines, infographics etc. E.g. in this text, a google map showing where Jarvis street is situated, as we don’t know Toronto; a photo of Jarvis street showing the bike lanes; political/satirical cartoons with relevance. By bringing this in, a new element for understanding the text is added.

Causes transferability (of skills)  between courses. When you force them to make connections in a text, it builds up this ability. Make connections to other studies, other events, other experiences. A couple of questions that might come up as the connector for this text:

Focuses on lexical items to facilitate meaning. But not only unknown vocabulary (NB not only words but phrases). There are 3 types: 1. unknown, yes, of course e.g. corridor; short-lived; had their day. How frequent is this vocabulary?  2. topical vocabulary – used within a particular discipline. E.g. in this case related to transportation. When we force them to notice this topical vocabulary, the process – exploring it etc. – makes them better able to use it in their own writing. 3. tonal language – that shows author feelings and attitudes towards what they are talking about. e.g. “quite costly”   “just 18 months later” (not a significant amount of time) “included mere painted borders” (mere – shows it is not sufficient)

Another reference to De Chazal…really need to read that book… 😉 Really interesting talk, great to meet Tyson finally, and I also bumped into a Sheffield Uni colleague from last year, who is keen on these reading circles so will be picking her brains over the summer for a context (very) specific perspective and useful hints/tips. This kind of thing is what I love about IATEFL and ELT!