Floor space only for this talk! A very small room and lots of eager participants…

Why the connection with swimming?

With swimming, you need to expend a lot of energy but you also need good technique. You can’t get anywhere without good technique in swimming. Wayne thinks it’s the same with pronunciation. Pronunciation is about what you do with your body, how you experience things.

When we give students information, does it help them to produce the language? Maybe not. It’s about what the body esp. oral cavity is doing.

With swimming, if you go to a pool or a lake, and watch people swimming, you will see lots of different styles, lots of variations in technique. There isn’t just one way to swim, we all have different bodies so the same way won’t suit everybody. With pronunciation, we all have different bodies and speak in different ways – if someone phones you, know who it is because their register, how they pronounce is very specific. There is also variation in accents. E.g. Manchester, northern vowel sounds. Both within anglophone countries and across countries.

Less than 5% of the population produce RP. It doesn’t represent the global reality. And it’s not possible for everyone to reach “native speaker standard” (loaded term). There is a ceiling effect. To get beyond your ceiling, you are going to have to allocate so much time to it that what happens to everything else? Teaching is all about priorities and time. 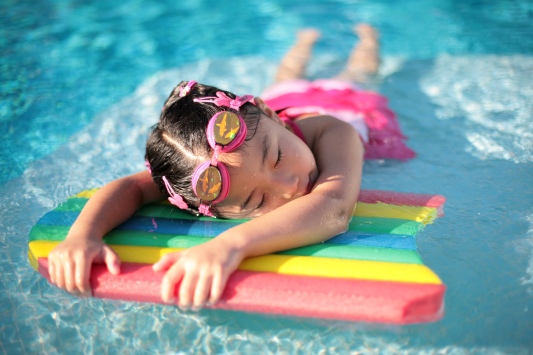 Feel the water! Image taken from Google Images search, licensed for commercial use with modification

Personal anecdote from Wayne: He was always quite a good runner at school, went to university, wanted to go to the next level so did as much running as possible, but realised it wasn’t possible without injury. So he needed another aerobic activity. Eventually settled on swimming. He went three times a week and got nowhere, had no technique, got dispirited. He tried copying everyone else, but it didn’t work. He got quite stressed about the whole thing, about getting nowhere. He even spoke to a few people to get advice, but it didn’t work. One day when he was getting out of the pool, an old guy asked him if he was ok, he said he was but couldn’t swim, and the old guy said “Just feel the water”. So next time, he went and decided to concentrate on what he was doing, not worry about what everybody else was doing, not worry about speed, and try out a few things by himself. Over a period, all these things fed into each other and he started to swim more efficiently and faster.

The principles are very basic, you just have to put them into operation and it clicks into place. BUT not overnight. Not in a single lesson. As a coach, it takes a lot of time to get people to that click into place point. But you need the principles. The better your technique, the easier it will feel. It also becomes automated. Like walking. But that takes a long time. To start with, you have to think about every moment, takes cognitive energy.

The principles of pronunciation are also relatively straight-forward but you need to have them before you can move with it:

Once you get a feel for what is happening there, then anything is possible. You have to experience pronunciation. With your body.

<Now we have to do things with our tongues, following instructions. Then produce sound. Then glides (diphthongs).>

So the idea is to get students to experience what they are doing with their tongue and where the sound is going.

For pronunciation, we need coaching not teaching:

Key resource for learning about pronunciation in this sense:

It was a very interesting talk. I would have liked more on the practical activities to do with learners front, but then it was a talk rather than a workshop. I’d really quite like to attend the workshop version…!