I’ve decided to use my blog as a reflective tool while doing my dissertation project – the final component of my M.A. in ELT –  hypothesising that this will make it an even more effective learning experience for me, by mapping it, enabling me to look back on my thought processes and decisions and see what effect these have on the project development. (Other posts in this series can be found here) Once I get to the end (13th September is D-Day!), as well as looking back over the experience of doing the project, I plan to try and evaluate the effect of these reflective blog posts on it.

Having read Willis D. and Willis J. (2007) Doing  Task-based Teaching Oxford University Press, and made copious notes relevant to my materials, flicked through Willis, J. (1996) A framework for Task-based Learning. Longman (looks very useful and clear, I will refer to it while making my tasks), and looked at a bit of Nunan, D. (2004) Task-Based Language Teaching Cambridge University Press, I do feel a lot better informed about TBL now than I did before. There is a lot more similarity between Ellis (2003) and Willis&Willis (2007) than there is between those and Nunan (2004). For Ellis (2003) and Willis&Willis (2007), the task is central whereas for Nunan (2004), it comes at the end of lengthy preparation sequence that resembles PPP. I prefer the Ellis and Willis versions, which have a stronger link to SLA theory. I like the principles that Nunan’s version is based on:

However I think they can be met through the Ellis and Willis approach, keeping the task central. Ellis and Willis both demonstrate how to scaffold the task through the preparation phase, while maintaining the focus on meaning and language (learner-directed – vs focus on form, which is teacher or materials led). Task-dependency is important vertically (within a lesson) and horizontally (across the task-based syllabus) – there needs to be logic behind it all. This can still be achieved while keeping the task central; it’s a matter of selection, grading and ensuring coherence. (In the case of my materials, the coherence is being maintained horizontally by the project thread and vertically by logical sequencing and grading of activities) Recycling can be achieved through giving learners the opportunity to produce similar meanings in different contexts (Willis and Willis, 2007). Active use of language occurs during the main task as well as in the preparatory and post-task activities. Integration is achieved through focus on language and focus on form, all contextualised. Making the task central does not prohibit creativity or limit the learners to following a model. And reflection can be woven in at any point in the task cycle, both vertically and horizontally.

As far as I can make out, Ellis (2003:163) believes that Consciousness-Raising (CR) Tasks, “a kind of puzzle which when solved enables learners to discover for themselves how a linguistic feature works” are tasks in their own right, with the non-linguistic outcome being awareness of the feature in question, while Willis&Willis (2007) believe in explicit form focus only featuring in the post-task phase, with implicit, learner-directed focus (language focus) able to arise at any stage. For CR tasks, Ellis (2003:163) identifies 4 main characteristics:

Heightened cognitive engagement, in the discovery element, should make the forms learnt in this way more memorable. So, this is materials and teacher-driven discovery of elements of language, where the task consists of discovering whichever structure it is. (Now I begin to see why H was emphasising the need to clarify exactly where the overlaps and differences are between this and Language Awareness, and which elements I am using of each…)

Language Awareness, then. As I discovered early on (see Dissertation Diary 2), Borg’s description of LA is cited thus in Svalberg, 2007 (emphasis as in original):

Comparing Ellis’s CR features and Borg’s LA features, exploration and discovery of language are common to both. Talking about language is common to both, if the CR task is collaborative. Recognition of the importance of cognitive engagement is common to both. The aims, I think, differ slightly. I think LA is wider, embracing the affective level, the learner skills, as well as the dynamism of language. I think Borg’s first point almost seems to be contrasting LA with CR. Ellis (2003:166) claims that CR tasks are “an effective means of achieving a focus on form while at the same time affording opportunities to communicate” but warns that they are not “an alternative to communication activities, but a supplement” (ibid:167). I think LA is similarly effective with similar caveats, but allows greater breadth of focus, perhaps more holistic. I.e. language is more than “a puzzle” (it’s dynamic, it’s socially situated – if Critical LA is included), learning is more than cognitive engagement (includes “learning skills” and the “affective level”). Bolitho et al. (2003) stress the importance of affect in LA and in language learning – unsurprising, perhaps, given that Tomlinson is part of the ‘et al.’! – and this seems compatible with TBL, provided task design takes this into account. How? Presumably by allowing for personal response, using engaging texts and providing learners with the opportunity to engage emotionally as well as cognitively.

TBL and LA make good bedfellows on the level of theory and principles: Bolitho et al. (2003) explain that LA approaches “like Task-Based Approaches, reflect the research findings that, in both L1 and L2, language acquisition occurs when, and only when the learners are ready” whereas LA approaches “do not typically exploit a syllabus based on a prescribed inventory of language items”, again much like Task-Based approaches. In terms of theories of language, “Pedagogically […] Language Awareness is seen as inseparable from text awareness, and the emphasis on language and use and in context entails a view of language as a social and cultural medium”; the importance of use and context echoes in TBL. So, it seems logical to agree with Ellis in terms of the validity of CR tasks within TBL but expand such tasks to reflect LA principles too. I think if a set of materials can successfully embody this (as mine will aim to…!), learners will benefit from a task-based approach that is enriched by the LA principles of language and learning.

For an LA approach, Tomlinson in Bolitho et al (2003:257) recommends that “some lessons are experiential, with the learners unaware that they are developing implicit awareness by focusing on features of a text in order to achieve an intended outcome” while “other lessons are both experiential and analytical, with the learners being helped to begin the exploration of features of a text which they have just experienced.”. To me, this parallels with the focus on meaning and focus on form elements of TBL. He adds that other lessons could be “analytical with the learners being asked to articulate and refine discoveries they have previously made” (ibid) – I think part of other lessons could, and this would be in keeping with the idea of recycling language in different contexts to refine awareness of how it is used, which Willis and Willis recommend. Tomlinson also recommends that “in all lessons learners are asked to think for themselves, and are encouraged to become more aware”. Within TBL, reflection is described as “a natural conclusion to the task cycle” (Willis 2006), though Willis (2006) emphasises the outcome of the task as the primary focus, while Ellis recommends that learner performance of the task and how they might improve it is equally valid. I think awareness of the reasoning behind the tasks is important too: metacognitive awareness. According to Vandergrift and Goh (2012), Self-awareness, task awareness and strategy awareness, elements of metacognition, are important in language learning. I think all of of these may be implicit in Tomlinson’s recommendation for learners to “become more aware”. 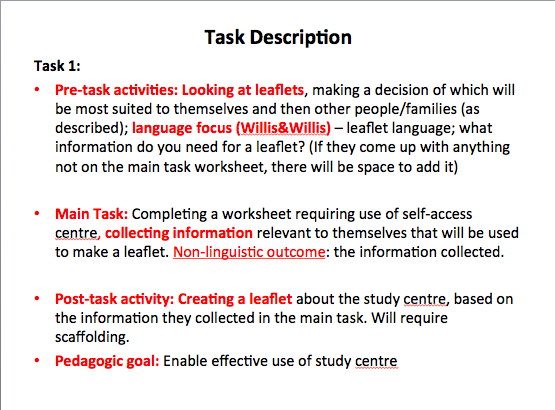 This is what I am attempting to do for all of my vertical sequences, as a starting point: identifying exactly what each part is and what it is trying to do. Once I have done this for all vertical sequences and made sure they cohere horizontally towards the main task of the horizontal cycle, I can then flesh them out more in terms of exactly what steps each task will entail etc. Part of identifying this information for each vertical sequence is the cross-referencing to theory and seeing if what I am trying to do matches with my rationale for doing it. My rationale for doing it is based on TBL and LA theory in interaction with my context. Obviously a massive omission in the above example, which is the only one I’ve done so far, is timing. Timing is still on the list of things to do…

So, progress is being made….!

Of course, thoughts/criticisms/suggestions etc all as heartily welcomed as usual. 🙂